History of the Centre 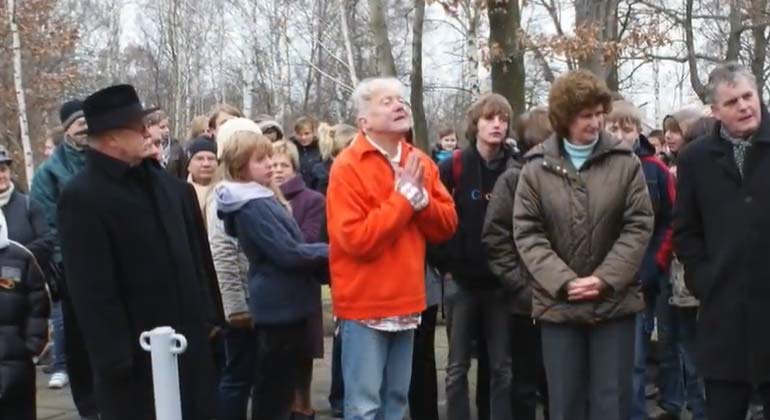 European Centre Memory, Education, Culture (previous name: European Centre for Education and Culture) is a brainchild of one man – his musical fascination and perseverance. The man was Dr Albrecht Goetze (1942-2015), a German theatre director and music aficionado. While studying the score of Olivier Messiaen’s “Quartet for the End of Time”, he found a side note depicting the time and whereabouts of the piece’s conception: “Composed in Stalag VIIIA in Görlitz, Silesia, in January 1941”. Thus Dr. Goetze learned about the existence of Stalag VIIIA in Görlitz. Unable to shake off the vision of the timeless piece’s origins, Dr. Goetze finally went to Görlitz in November 2001. As he himself mentioned, the trip was a disappointment: no one had heard of Stalag VIIIA there. A road leading to the edge of the town – the only trace of the former camp – was shown to him in the eastern part of the town. The town that now belonged Poland, and since 1945 went by the name of Zgorzelec. The experiences that accompanied him during his walk through a birch forest, as he came across a small cemetery, an obelisk in honour of the prisoners, and remnants of the camp facilities, sparked associations with Messiaen’s music, and led to his decision of giving up his previous life and moving from Munich to Görlitz.

He also came up with a clear goal: to create a centre for meetings and cultural events in the place where the “Quartet” was created; a place that would bring out from oblivion the fact that a great musical piece was written here, and that more than one hundred thousand prisoners of war were held here, with over ten thousand who did not survive the captivity. Meetingpoint Messiaen, as it was called, was meant to remind us that imprisonment, fear, and uncertainty of tomorrow can be overcome by the inner strength of music. 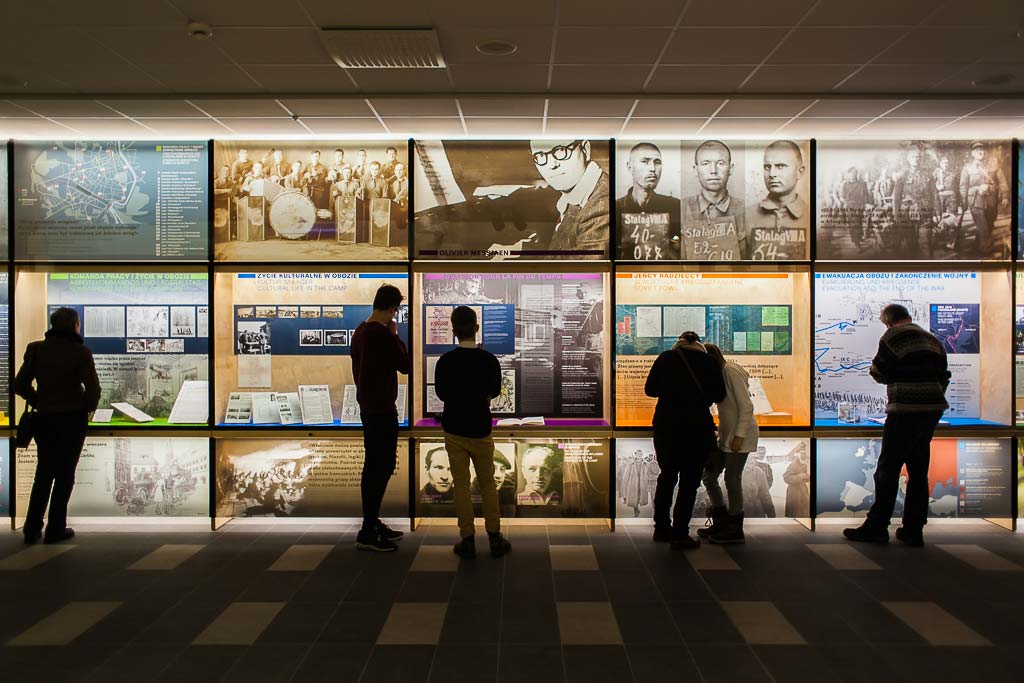 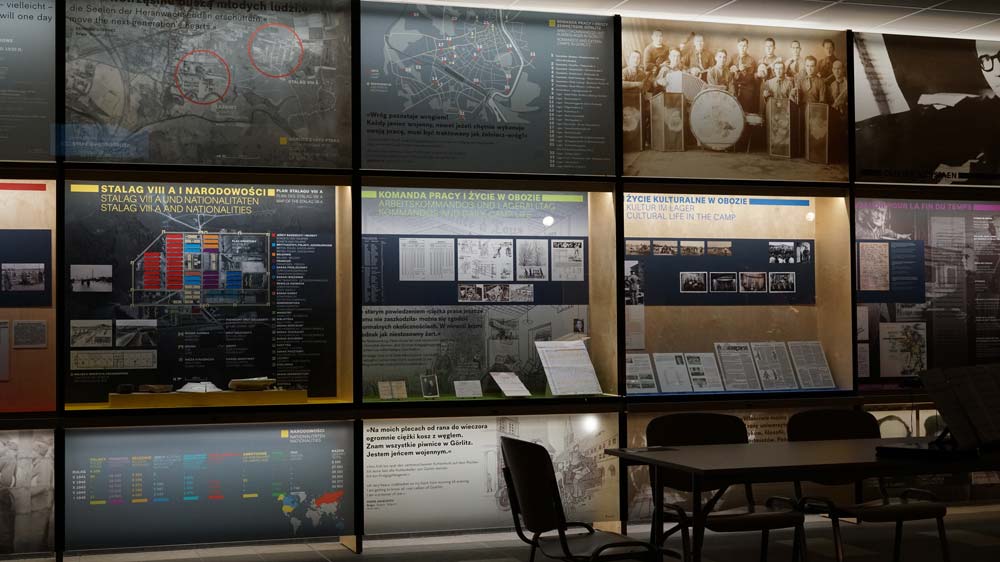 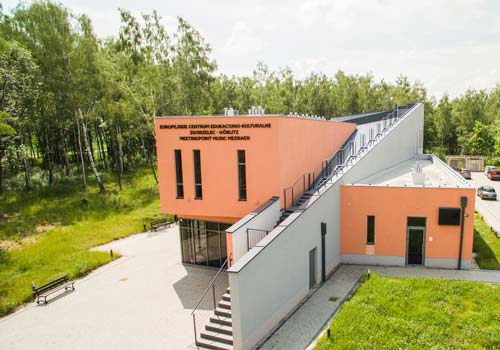 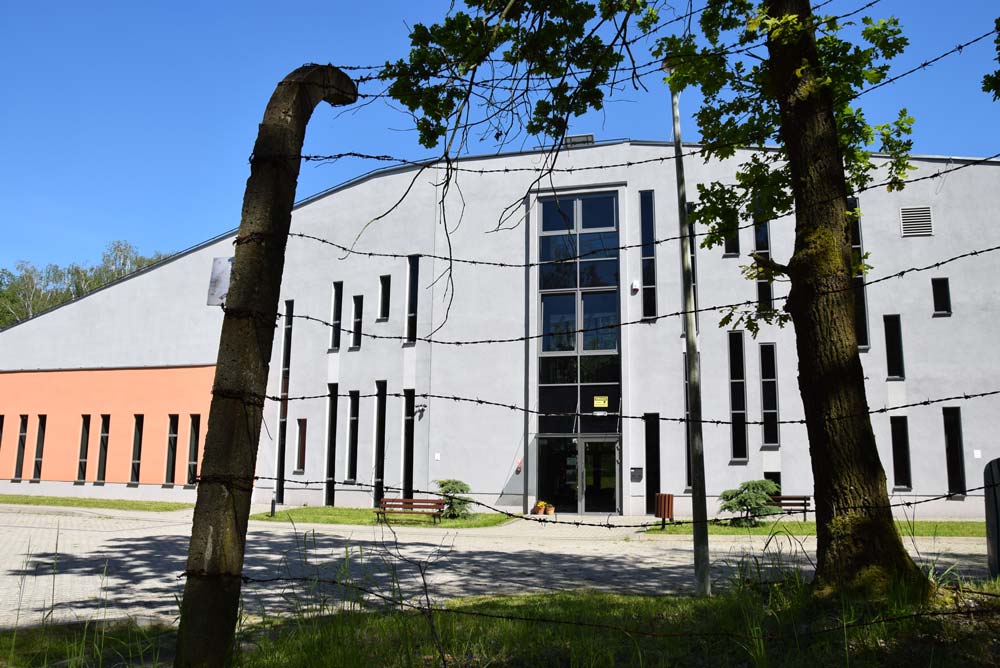 On the Polish side of the Nysa river, he found an ally in the person of the history teacher Roman Zgłobicki. For him, the struggle to preserve the memory of the Stalag and its captives had been the content of life since the early 1970s. Soon, the first meetings with representatives of the local authorities of Zgorzelec were held. Dr. Goetze gained attentive and kind audience and soon-to-be partners in the Municipality of Zgorzelec.

These talks concerned the construction of a facility on the site of the former stalag to commemorate the existence of the camp, as well as the opportunities for cooperation and activities towards deeper integration of both towns’ communities and of the border region at large. The planned facility was to remind of the tragic past, but also to serve as a symbol of the common future.

To outline the scope of tasks and specify the problems to be solved required a great deal of meetings, discussions and reflections. The Centre for Entrepreneurship Support Foundation was chosen to implement the future investment, as an efficient non-governmental organization, already experienced in carrying out EU programs. It was obvious that the implementation of this investment would be impossible without financial support from the European Union. The Foundation agreed to undertake activities concerning the possibility of obtaining and securing the necessary financial resources for the implementation of the investment, preparation and submission of a project application and subsequent project implementation.

The following few years were devoted to adapting the architectural concept to the objectives of the future Centre, to a search for administrative solutions, allies and patrons, and to preparing an application for co-financing by the European Centre for Education and Culture Zgorzelec-Görlitz from the European Regional Development Fund under the Operational Programme for Cross-Border Cooperation between Poland and Saxony 2007-2013, as well as raising the necessary Foundation’s own contribution. It was also clear that the entire site of the former camp would be preserved as a memorial site.

The Meetingpoint Music Messiaen team began to organise international workshops, where young people from several countries carried out excavation work under the supervision of scientists, retrieving many petit artefacts belonging to the prisoners of war, and clearing up parts of the former stalag for future construction.

On 15 May 2009, the Foundation, supported by the local government of Zgorzelec, announced a competition for the development of an urban-architectural and functional-utility concept for the future facility.

At its meeting on 24 June 2009 in Zgorzelec, the Competition Jury, having reviewed the competition entries, selected the best one and decided to award first prize to the Irish architect Ruari O’Brien, who ran the Dresden-based design firm Architects.Licht.Raumkunst.

In September 2009, the Foundation submitted an application for co-financing the project, but it was withdrawn in February of the following year due to lack of bank willing to lend the investment costs. Thanks to the efforts of the Foundation’s authorities, the kindness of the local authorities of Zgorzelec and their understanding of the project’s significance to the region, the Municipality of Zgorzelec changed the master plan and introduced provisions allowing for the construction of the Centre on the sites of the former Stalag VIIIA. The Commune Council adopted a resolution on transfer of land to the Foundation for the construction of the Centre, and a resolution on the guarantee of a loan in the form of a mortgage encumbering the communal land. Similar actions were taken by the Municipality of Zgorzelec. The final decision concerning the project partners was also made. On July 14, 2010 a partnership agreement was signed, by which the Centre for Entrepreneurship Support Foundation in Zgorzelec became the project leader, and the following acted as partners: Association MEETINGPOINT MUSIC MESSIAEN from Görlitz, Zgorzelec Commune, Municipality of Zgorzelec, Zgorzelec Poviat, Görlitz Poviat and Association of Founders and Supporters of MEETINGPOINT MUSIC MESSIAEN. An agreement on securing the funds was also signed with the bank.

During this time the first presentations of the project took place in Warsaw, Berlin, Brussels, Dresden and Wrocław, and other cities. The idea and project aroused great interest and was highly acclaimed everywhere.

The application was finally submitted in June 2011, and in October the contract for co-financing the project from the European Regional Development Fund within the Cross-border Cooperation Programme Poland-Saxony 2007-2013 was signed.

In December 2011, the Foundation took over (in the form of a notarial deed) a donation of undeveloped real estate from Zgorzelec Commune: plots of land numbered: 305 and 306/1 (Obr.0007, Koźlice, Am-1) with a total area of 6.9307 ha. The donated property was used to implement the statutory objectives of the Foundation in the field of culture, for the construction of the European Centre for Education and Culture.

However, the commencement of the project was further postponed due to misunderstandings with the architect who won the competition, and the Foundation was forced to change the concept and commission a second functional-utility program. The winning design by an architect from Görlitz, Christian Weise, was accepted for implementation. All these events led to the need to submit an annex to the design, which changed the architectural concept of the Centre’s construction, but all the requirements set out in the competition were retained.
On May 25, 2013, an annex to the construction contract was signed, the value of the project was approved at 3,366,042.32 euros.

The next steps involved the announcement of a tender for the technical documentation and construction of the Centre. In July 2013 an agreement with the contractor was signed and the building site was handed over. Construction works started in January 2014, and in January 2015 the European Centre for Education and Culture Zgorzelec-Görlitz was commissioned.

Unfortunately, Albrecht Goetze could not take part in the opening ceremony – he had to leave Görlitz earlier in 2012 for health reasons.

Since 2008, on January 15 of every year, in a large tent set up on the site of the former Stalag VIIIA, concerts had been held to commemorate the first performance of Olivier Messiaen’s “Quartet for the End of Time”. From 2015 on, the solemn concert has been held in the newly built facility – the European Centre for Education and Culture.

The Centre housed the first components of a permanent exhibition concerning the former camp, compiled by Meetingpoint Music Messiaen. The Centre has also become a place for many activities bringing the two societies together, with special focus on both nations’ youths.
From its opening, until autumn 2019, the Centre was visited by several thousand guests: concert audience, families of former prisoners of war from all over the world, tourists visiting the border region, as well as hundreds of workshops, seminars and conferences’ participants.

The numerous meetings and events were made possible thanks to close cooperation between Polish and German partners from local governments, and substantive and logistical support from Meetingpoint Music Messiaen associates. The young members of the association, together with a small team from the Centre, guided dozens of groups of young people and adults from different countries around the Stalag, bringing them closer to the fate and suffering of its prisoners – soldiers of many nationalities.

The aim of the Centre, in addition to educational and cultural activities towards the formation of regional awareness and the resulting duties, is to cultivate the memory of the former German POW camp Stalag VIIIA in European societies, especially Poland and Germany. Through cultivating the memory of this place, the Centre will strive to promote and respect the history of the region, and as warn against the dangers arising from the increased nationalist activity in Europe.

In order to emphasize the importance of historical memory connected with the camp to the Centre’s activities, its name was changed to European Centre Memory, Education, Culture.