Among the 20 thousand French and Belgian prisoners of war who were sent to the camp in June 1940 was the French composer Olivier Messiaen. There have been various accounts of the circumstances of his military service period; according to one of them, he was a musician in a music and theatre troupe with the Second Army (where he met the cellist Étienne Pasquier and the clarinettist Henri Akoka); according to another, he was sent to a medical unit due to poor eyesight. At Verdun, he was taken prisoner by the Germans and transported with thousands of his compatriots to Stalag VIII A. Although the captivity must have been an unimaginable experience, Messiaen was quite lucky. 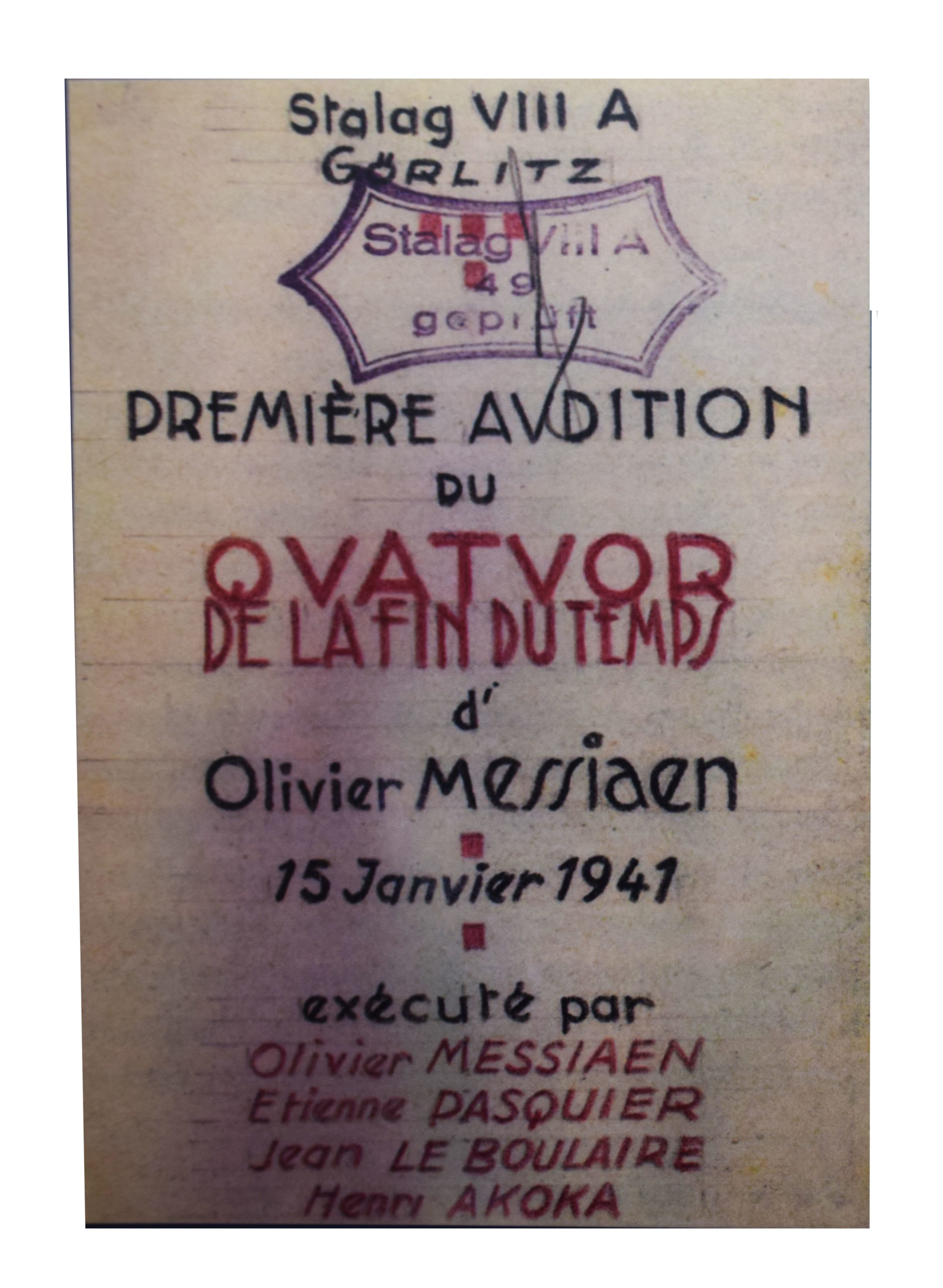 Firstly, the Germans respected the provisions of the Geneva Convention when dealing with the French, Belgian, Dutch and later British and American prisoners of war. Secondly, this is where Messiaen met Carl-Albert Brüll, a French-speaking lawyer from Görlitz, who served as a translator in the Stalag. Fascinated by Messiaen’s work, Brüll enabled him to compose, providing music paper and pencils, and above all – finding a place where the composer could work in peace. Under these conditions, the Quartet for the End of Time was created, a piece for violin, cello, clarinet and piano, which later found its way to the canon of the greatest chamber music works. The piece was first performed on a frosty evening January 15, 1941 in barrack 27 B in the presence of several hundred prisoners and camp personnel. It must have been a shocking experience not only for the audience, but also for the performers themselves. The piano part was performed on a battered piano by the composer himself, the violin part was played by Jean Le Boulaire, the clarinet by Henri Akoka, with Étienne Pasquier on the cello. 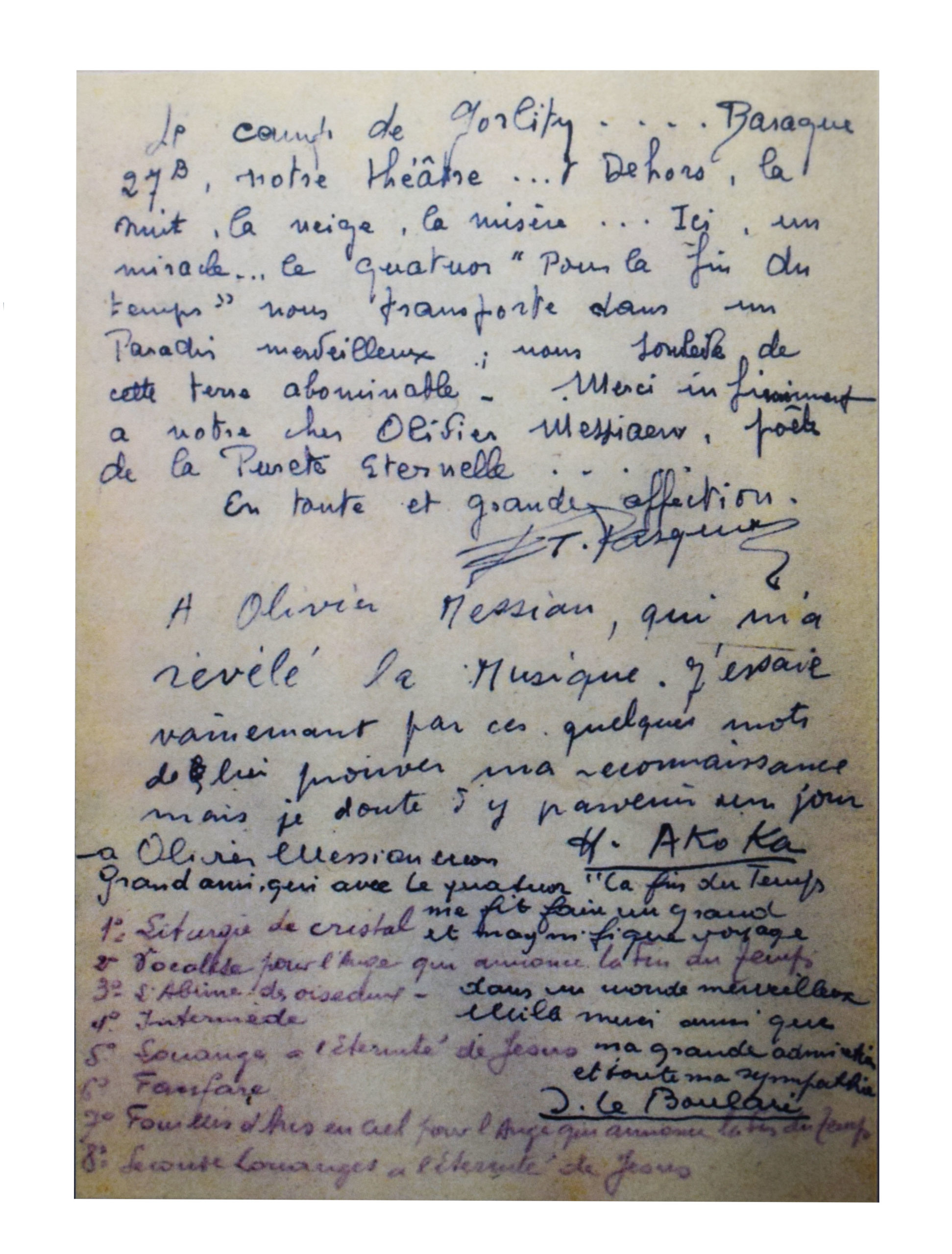 A hand-made camp poster informing about the concert has survived. Words of admiration and thanks to the composer scribbled by each of the performers can still be seen on its reverse.
Rebecca Rischin, a clarinettist and author, in her book For the End of Time: The Story of the Messiaen Quartet, cites Henri Akoka, who claimed that his only war time memory he wanted to keep is the Quartet. Yet he never performed the piece again.
A noteworthy fact was brought up by Cynthia Haven in her article in Stanford News marking the hundredth birthday of Messiaen. The said Carl-Albert Brüll advised French Jewish POWs against fleeing, saying that they were safer in the camp. 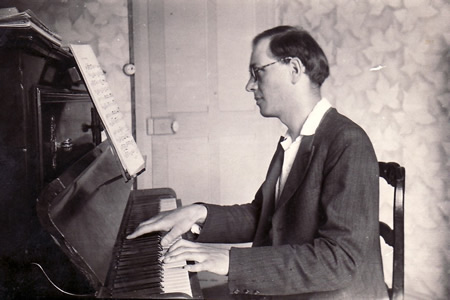 He even dragged Henri Akoka, an Algerian Jew, out from a truck at the very last moment to prevent him from escaping. But Henri Akoka believed that “prisons are to broken out of”. After several attempts, he eventually managed to escape from the camp in April 1941, jumping on a riding train “clutching a clarinet under his arm”, and made it to the so-called free zone (Vichy France). Henri Akoka died in 1976.
Olivier Messiaen was released from the camp in February 1941, shortly after the premiere of the Quartet, probably thanks to Carl-Alberta Brüll, who may have counterfeited the necessary documents.